As you know, most of the time, the “.com.tr”, “.net.tr” and “.org.tr” extensions were allocated in a documented manner during the Nic.TR period. However, these domain name allocations will be made in an undocumented scope and on a first-come, first-served basis within the TRABIS system. In the other framework, ".gen.tr", ".biz.tr", ".tv.tr", ".web.tr", ".info.tr", ".bbs.tr", ". Tel.tr” and “.name.tr” extensions will not require documents for the realization of allocation transactions. 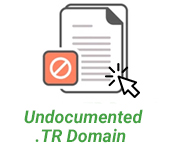 Only the registration fee is charged to the pre-registration fees. If the domain name is not provided to you, this fee will be refunded to your deposit without deduction.

Only 1 order can be placed by the person who made the first reservation for .com.tr, .net.tr, .org.tr domain extensions.

How do I buy a .com.tr domain?

Do you need help?
Contact with us via help desk Register For Me

We Can Register .com.tr Domain For You
If you need us to register your domain just ticket us
Register For Me

com.tr extension, being used among 81% of the domain names which are in usein Turkey and being the fifth most popular country code top-level domain in the Asian region, is a domain name preferred by natural and legal persons who are commercially active or wish to engage in online commercial activities.

The main purpose of domain name with com.tr extension, which has been in usesince 1991 in Turkey, is to increase online commercial activity taking place in Turkey. Com.tr, which has a high prestige due to the fact that it is an indication that a brand carries out commercial activities in our country, can be purchased for brands, companies and also for individual use in the form of namesurname.com.tr. Since domain names with com.tr extensions are given by Middle East Technical University with an institution approval, necessary documents must be declared during the application for registration.

The most important and essential element that distinguishes the services or products that you offer from their counterparts and ensure their protection is to be a brand owner.By registering your brand, you can get distinguished among other brands that operate in similar ways, prevent facing problems such as counterfeiting or forgery, and most importantly, you can legally guarantee the intellectual and industrial rights of your brand. If you have not yet registered your trademark registration, while you are purchasing your domain name with com.tr extension, your trademark registrationcan be done by Atak Domain if you wish.

You can create a website with where you can perform your business activities by performing domain name registration with com.tr extension which is Turkey’s country code top-level domain extension, and thanks to its commercial reputation, you can take your brand’s reputation and trust of your customers a step further.

You can search a domain name you want to purchase from our domain name search page and you can take advantage of the cheapest domain name registration with com.tr extension.

For all domain name registration applications with com.tr extension, Domain Name Allocation Form must be forwarded.

You can download and fill out the domain name allocation form on your computer from here.

Your .com.tr cheap domain name transfer process can be done fastly and easily. Let’s start it clicking "Transfer Now" at below, and our Domain Experts will guide you for the process.

Your domain name can be renewed simply! Firstly, click "Renew Now", or log into your Account Manager, select your .ru domain name which needs to be renewed, select the term of your renewal, and finally, check out. That's all!

For .com.tr registration need below documents;

-Application form - Click for download.
- For the applications made by the legal entities and organisations; the official documents required must certify that the domain name you apply for is your registered trademark or corporate name. One official document that appropriate for the application, which may be "Commercial Registration Certificate", "Trademark Registration Certificate" etc., is sufficient to register a ".tr" domain.
- authorized signatures document

-Furthermore, foreign applicants are to prove business activity in Turkey or have a business relation with a company that is domiciled in Turkey and provide supporting official documents such as franchising agreement, distribution agreement, invoice, custom papers etc.

You can also register below domains without documents;

Note: if you dont have got trademark we can help you register it.

Contact us by opening a ticket, let us know by contacting you.

MAKE A REQUEST
Call Me
About Turkey
Republic of Turkey, a large part of the territory of Anatolia, while a small part of the extension of the Balkans is a country spread to Thrace. Neighbors; It is adjacent to Armenia, Azerbaijan, Georgia, Iran, Iraq, Syria, Bulgaria and Greece. Its Area is 783.562 km². The Capital is Ankara.

The first movement related to internet in Turkey in 1991, starts through METU and again in 1991 all extensions are being distributed in the country through METU. However, registering the name of your site with this extension is a little different than other tlds. . For example, everyone can buy and use atakdomain.com, but atakdomain.com.tr can be used only through the company or persons who have registered the trademark of atakdomain. you will be prompted to submit the required documents when registering this domain name. The main aim of .com domain name on the internet is to increase the commercial activity taking place in Turkey.

Yes, there are documents you need to send to our system in order to register the com.tr extension. The required documents may vary depending on the purpose of use, you and etc.
documents;
https://www.atakdomain.com/en/domain-registration/turkey/com-tr

Com.tr extension is a TL which is available after certain registrations. Receiving this domain means, you work with your board adopted a tax or proves you live in the Republic of Turkey, etc.. So you give confidence to your users in both e-commerce and banking transactions. Also it works with 81% of .com tlds of domain names in Turkey. It has become an attractive choice today due to its frequency of use and the trust it gives to registration.

Yes, you can transfer your .com.tr domain.

Yes, you can do bulk .com.tr domain registration.

If you provide the required documents to buy .tr domain name, you can follow the following steps:

.com.tr domain names can be transferred by several different methods.;

1. If the nic.tr information belongs to you then log in your nic.tr panel.
2. Click on the Management Panel
3. Enter the link for Contact change.
4. Select your domain address and proceed

5. The domain names you want to make contact change are listed above. Please enter the new contact code (s) you want to assign and click on the "Continue" button.

If your domain address registered on different company or person, you can make free domain name transfer by sending the following documents via [email protected]

The required documents for the Com.tr domain names are different.

Required documents for .com.tr are listed below. .com.tr domain names could be bought with company registration or trademark registration application - registration certificate.

Required documents of .com.tr for the companies:

Required documents of .com.tr for the trademarks:

Note: You can register the following .tr domain names without documentation.

Note: The signature and stamp on the petition as well as the authorized signatures lists and photocopy of the identity card must belong to the owner.

Atak Domain provides professional mail service for companies and individuals. You can register a mail from our Mail Hosting packages by entering your .com.tr domain name.

You can find out whois information of .com.tr domain name from our whois page.

Objections to domain names are usually made via Wipo. In Turkey, any objection to the com.tr domain names is made via BTK Trabis system.
In Domain objections, it is required to prove that a malicious application has been filed to create a relationship with a trademark.

The expiration period of .com.tr domain name shall be 90 days from the domain name end date.

In order to register for namesurname.com.tr, Tr identity no and photocopy of ID Card are required. We kindly request you to provide the relevant document following the order by creating a ticket.

No. .com.tr domain names shall not be sold. But it is bought by deregistering.

No. The Whois information of .Com.tr cannot be hidden.

Atak Domain is best SSL certificate supplier for your website. The Most Popular SSL Certificate Solutions - By using SSL you guarantee the highest possible encryption levels for online transactions.

Managed and light web hosting. You can forward your domain name for free. We make it easy - quickly get your website off the ground.